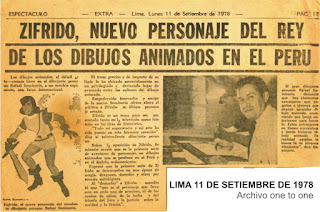 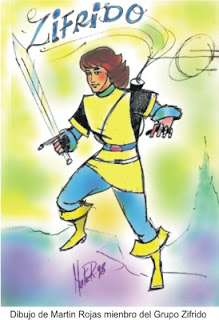 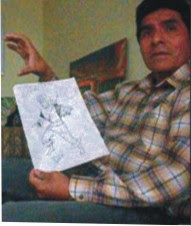 An untold, ideal, adventure story by Rafael Seminario Quiroga, and his first attempt on making the first animated film in Peru. We interviewed one of the members of this excellent group, “Zifrido” a professional animator and artist, Carlos Panta, currently working as a teacher at Catolica University……*Zifrido was a hero who fights with sword and shield against witches, dragons acquired powers to rescue a princess”.

Interviewer: Tell us about your first contact with Rafael Seminario RSQ Quiroga?

Carlos Panta: I think it was between 1977 & 1978, when I saw an ad in Lima`s newspaper, which drew my attention, it was the first time I had seen a course like that in Peru, I replied this ad concern because I wanted to see more cartoons on TV like painting, but with this, my expression was ending up hang on a wall, furthermore I knew that cartoonists reach a wider audience. When I called, RS offered me a course; it was a great opportunity for several of us, he training me. I remembered in school I took a drawing course talking about picture animation; however was something else to enter to a real animation studio drawing and talking all the time about animations and films. I always like stories and fantasy illustrations, however I didn`t know how to animated them, so I spoke with RSQ personally, he asked me some questions about my interests in animated films and check my talents with several test, the first was to create structures, axes and give them movement with a pencil in a small piece of paper and other which and don`t remember now. As he also taught at the ENBA, National Bellas Artes School, he had to escape to continue with my classes. When I finished all my training, he invited me to practice in his studio, when we talk about an ambitious and exciting project to help him as an artist, so I left ENBA School.

Interviewer: How did anyone start in this project?

Mr. Panta: You must be invited by RSQ.

Interviewer: When the Zifrido group was founded?

Mr. Panta: On December, in RSQ's birthday and Old Mickey Mouse too. Each of us signed an oath of collaboration and devotion. I don`t exactly remember how it started, however we got together from people from his own classes, from different hours and courses on 1977 or 1978 to 1980. Many were still studying high school, and I remember our supervisor after RSQ, Mr. Ormeño Chumpitaz, a man with glasses, de Luskas, Espinoza, etc. We were almost 15 people however, little by little each one split out.

Interviewer: Do you remember someone else?

Mr. Panta: I remember seeing again Espinoza at ENBA School on 1980 , when I went back to continue my studies, we make a 10mins advance but there was no marketing, so we depended of RS, we got the idea we need the money to prepare and recruit staff.

Interviewer: Have you got a picture of the study or group?

Mr. Panta: No, I haven`t, I saw some of them years ago, as it happens to artists in Peru, we`re all around, helpless and without money or support. I resisted like this 3 years.

Interviewer: How was the studio?

Mr. Panta: It was on the first floor in 777 Arenales Av, Lima. In the entrance, there was a small office, then a wide area with tables, stands, folders, lamps, all for classes. In another part was the shooting room with the main camera and reflectors, a bathroom and a laboratory room for picture developing.

Interviewer: How was it working in the production process?

Mr. Panta: The only one doing animation was RSQ, we made additional tasks like copying, cleaning colors, drawings and intermediates. It was very difficult to be a professional Animator on that time, because the path is long and sacrifice and RSQ believe in detail, dedication, and hard work. He worked with a type of homemade tools, signs, statistics, etc. I myself saw him once a splint that he invented; he was annoyed when I asked him the use of this. Once someone from the group took away some drawings he used to trash away, so he became very annoyed when he couldn’t find them, and this person had to return them right away. We had a storyboard and script given by RSQ, which is the most appropriate way to develop each scene. We also did Animatics with music, we were very excited that the final art looked so good, then we started in the scenery working since the morning in each scene, I remembered improving my drawing skills quickly. The camera tasks were quite difficult because we needed to follow multiplanes and RSQ sheets and instructions; they were 16 mm and 35 mm cameras, which RSQ modified. I remembered it took 2 hours to record just 5 seconds of pencil animation.

Interviewer: How was the paper format?

Mr. Panta: We use a 25 x 35format with little squares for sceneries was great; the paper was called “Sulfito”. RSQ was responsible for cutting and distribute it.

Interviewer: How was the project finance?

Mr. Panta: As we had no business with RSQ`s budget, some companies funded out project like Coalface, Pompeian, Casa Hindu, Garza, Ambrossoli, Coca cola, etc. It was not easy job, because we had no time, we even worked on Sundays, many sleepless nights, because it was for a TV commercial so we couldn’t stop to produce.

Interviewer: Which was your work?

Mr. Panta: I did a lot of research about movies and warriors from different times, animals, dragons. He painted the lenses with ink, so we need to clean up the animated drawings. He was also doing testing’s, shooting in black and white animation in the testing room, then he done all films.

Interviewer: How did you feel at the end of a day?

Interviewer: How difficult was your decision to leave?

Mr. Panta: RSQ decision was delayed, because we didn`t get any funding, so he stopped all production and we left.

Mr. Panta: We talked about his personal experience at Disney studios, about many commercial projects, animations, clay animation and documentaries such as El Pacto Andino, Impuestos, Mary Pili, etc. I trusted him in reviewing my anatomy final art, because in those years I was still an amateur body-building.

Interviewer: How was the chemistry in the group?

Mr. Panta: We became very close with RSQ, we went to the movies, we made film`s critics, even on lunch we continue working. We were very enthusiastic; I think I have never felt like that again. We started working at 10am and stay in the lab until 4pm, then we continue until 9pm, we weren`t surprise because drawing at night was fast. Sometimes, there were more students for classes; I remembered seeing about 300 people, but in different days and times, so RSQ was very busy on those times.

Interviewer: When did you walk away?

Mr. Panta: I quit on the late 1980 because there was no more work, we worked so hard just after school, I realized then all those 3 years I live on my parent`s tips, so they want to kill me. They weren`t agreed about how many nights I spent on the studio, so continue in the group became a dilemma for me. The ENBA`s Art school pressured my family to finish the academic training, so my family was unhappy to withdrawn this school, besides on Sundays when I went to the studio, they asked me, where do you go? And they can`t believe me. All these problems influenced on my decision.

Interviewer: You regret this experience?

Mr. Panta: Of course no, this experience was unique, rich and with full of knowledge. RS is a great artist and excellent teacher, he prepared us to be professionals, he used to say, Artist must learn to sacrifice, so interesting because on those years there weren`t computer programs, it was real traditional animation.

Interviewer: -Did you do more short apart from Zifrido?

Mr. Panta: No, we didn`t have time for other films or experimental ones, but to train new members, we had new ones like the fly, the cock, the grasshopper, the ant, super-eska, home to doodles, etc.

Interviewer: Could you tell us a bit more about Zifrido?

Mr. Panta: This project was ideal and with plenty of sacrifice with the illusion of making the first animated feature film in Peru, so RS stopped to teach for a while. He started working at 7am and did not leave until 11pm. We were the first and pioneering in animated films, which in time became TV series, but above all was the high level of animation we developed. Can you imagine that we even done the sun's rays with “Tiralineas”, the characters run, fight, dance, etc, however we could only do 10 minutes in an hour and a half. Even those 10 minutes were part of a movie and then, it was Zifrido with his sword and shield fighting with fantastic soldiers, dragons and witches who transform into monsters with 2 heads.

Interviewer: Do you know where are those 10mins film?

Mr. Panta: RSQ did the storyboard and progress, so I suppose he kept all.

Interviewer: No one supported to RSQ?

Mr. Panta: I want to say it again, all was self-financing by RSQ, so all these 3 years we weren`t paid a sol, however we work with believe and real affection for Art. However everything was left on these walls, all work was never watch on TV, and the public never know until today about this adventure. At that time there were only 4 channels on TV, so the media was very limited, if we had a fund, all had been different, we had to erase and prepare again the used papers to reuse them, an without thinking about lunch, we all ate some bread and drinks.

Interviewer: Did you have press coverage?

Mr. Panta: I remembered only through the newspapers, we were tight with money, so we should do all ourselves to reduce costs. There was no support, thus we didn`t ask for a big budget, we wanted it enough funds for transportation and food, materials, implements, rent and other expenses were covered by RSQ with great difficulty.

Interviewer: After all what did you do?

Mr. Panta: At the end, I was tired and stressed, so I came back to ENBA School. After I met a teacher who taught me at Guadalupe school, but after the experience with RSQ, I knew all about animated films, so ENBA didn`t motivate me, so I left school and I devote myself to work and not forgetting. Years later I came back to work in an artist`s studio, "Tilsa", there I started from zero to draw, to paint, to move in the art business. Then, I applied to the Catolica University Art Faculty to teach at the graphic design program, they accepted me and I`m still there. 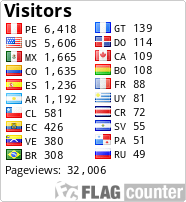 ONE TO ONE INTERNATIONAL WEB

Read, suscribe to our Peruvian Magazine 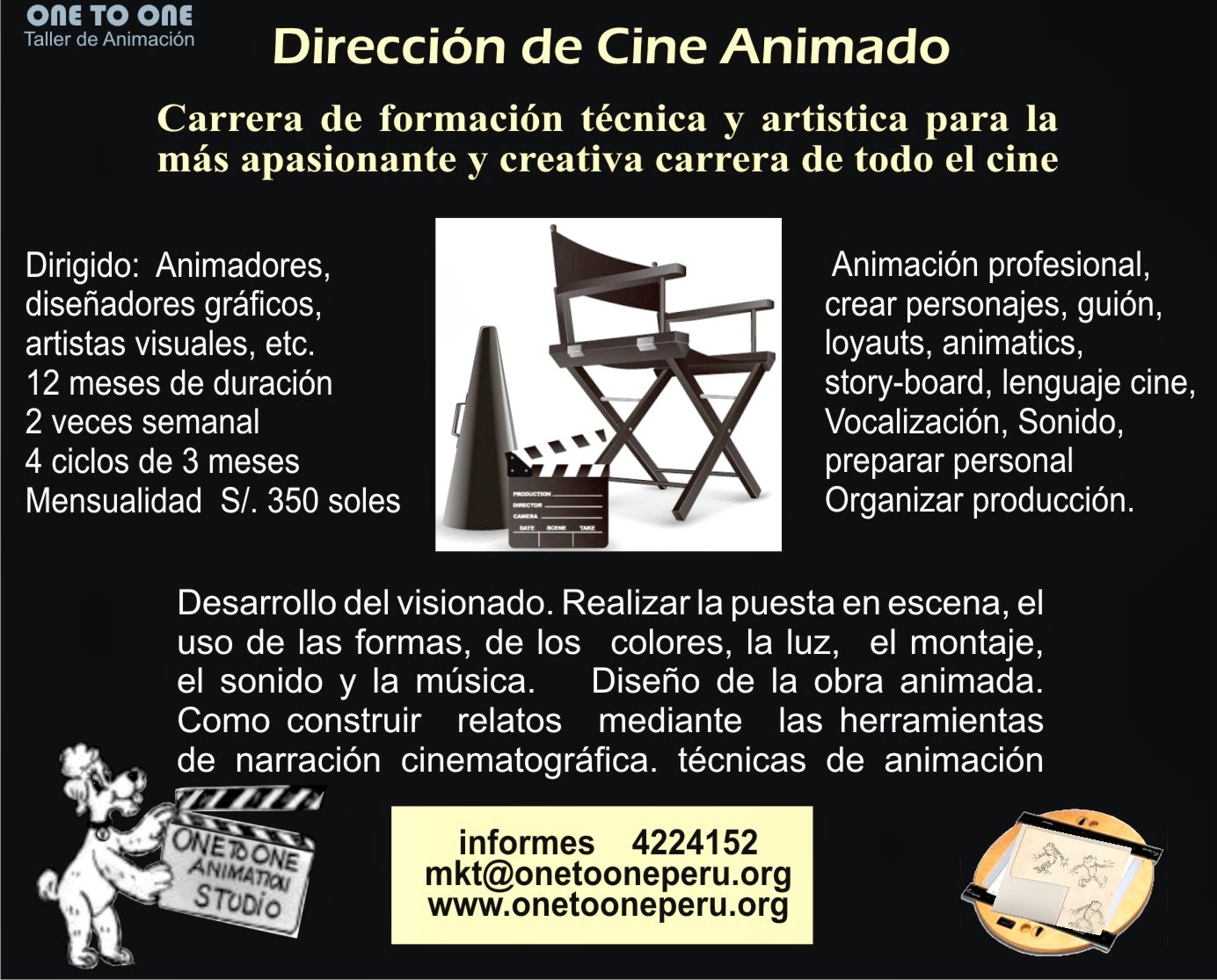